On Saturday, December 10, the Hollywood Pantages played host to the world premiere of Rogue One: A Star Wars Story.  It is a rare occasion to turn this theatrical house into a state of the art movie house but Disney did just that and to stunning effect.  With a seventy foot screen, a digital laser projector and over 300 speakers, the historic Hollywood Pantages roared back to life and restored its movie house glory.

From where I sat, with Anthony Daniels (C-3PO) to my left and Peter Mayhew (Chewbacca) behind me, the little kid who watched the very first Star Wars with his Mom was now about to watch the latest movie with his own daughter.  I was both a fan of the movie and excited to see a movie play once again in the theatre.  As the movie started to roll, the glow from the screen illuminated the entire audience who were all transfixed, eagerly awaiting the first look at the next Star Wars installment.  But for me, I was taken at first not by the movie, but something hard to describe.  The theatre felt different for me.  I don’t know what the feeling was but it was wonderful.  We, the staff, so often take for granted the musicals we present on stage and our ability to present show after show.  We forget what a quiet roll the theatre itself plays.  But at the premiere, we were allowed to simply admire a wonderful movie, being shown in one of the most beautiful venues in the country.  It is a moment I can’t adequately describe and one I won’t soon forget.

Large Rogue One posters line the red carpet at the premiere

We don’t know when we will host a premiere again, but I, for one, hope it is sooner rather than later.  For now, we look forward to the theatrical release of Disney's Newsies: The Broadway Musical, filmed here at the Hollywood Pantages last September.  For a brief moment, the theatre will get to be a part of movie history again. 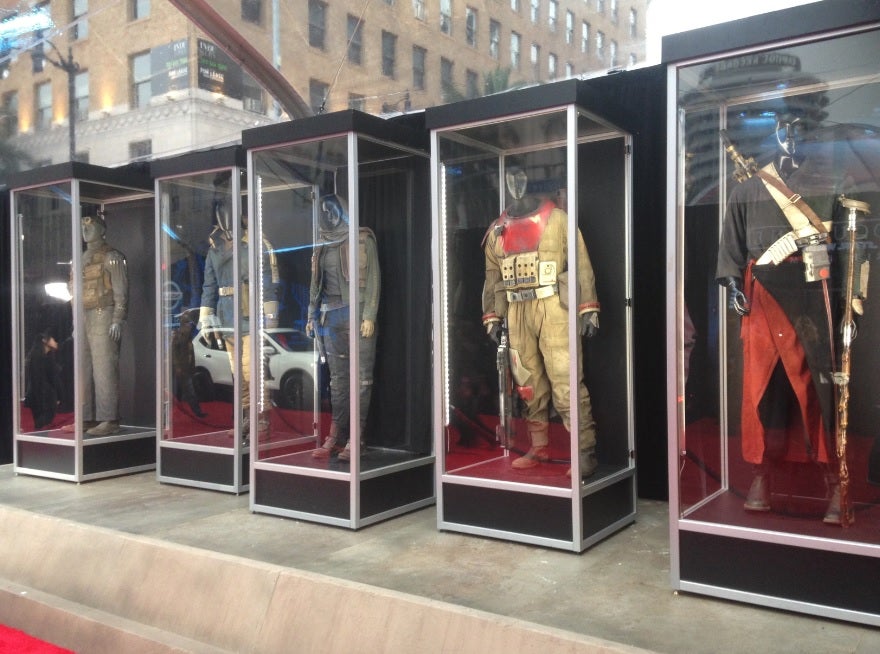 Costumes from Rogue One were on display for premier goers 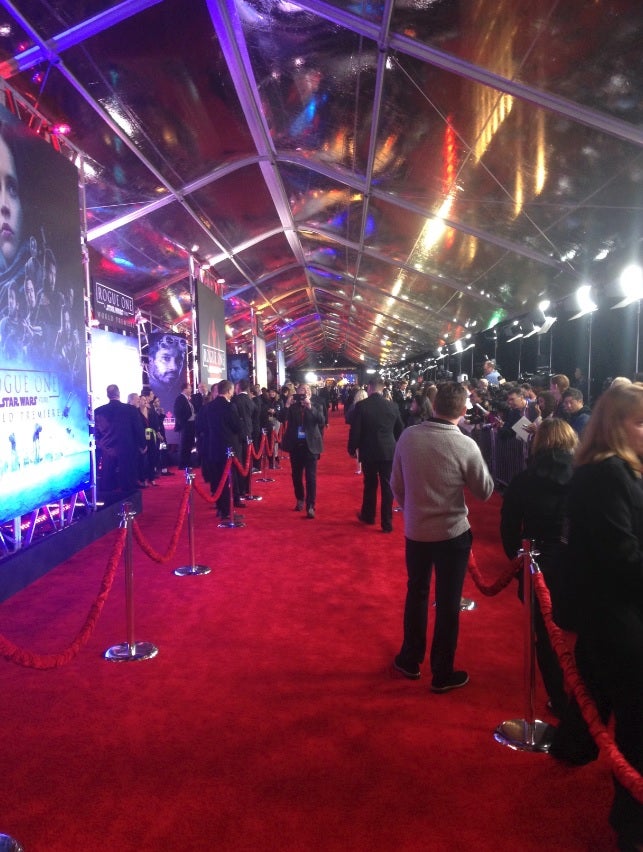 Due to the threat of rain, a tent was errected to cover the leng of the carpet

The cast of Rogue One: A Star Wars Story pose for photos in the X-Wing Fighter 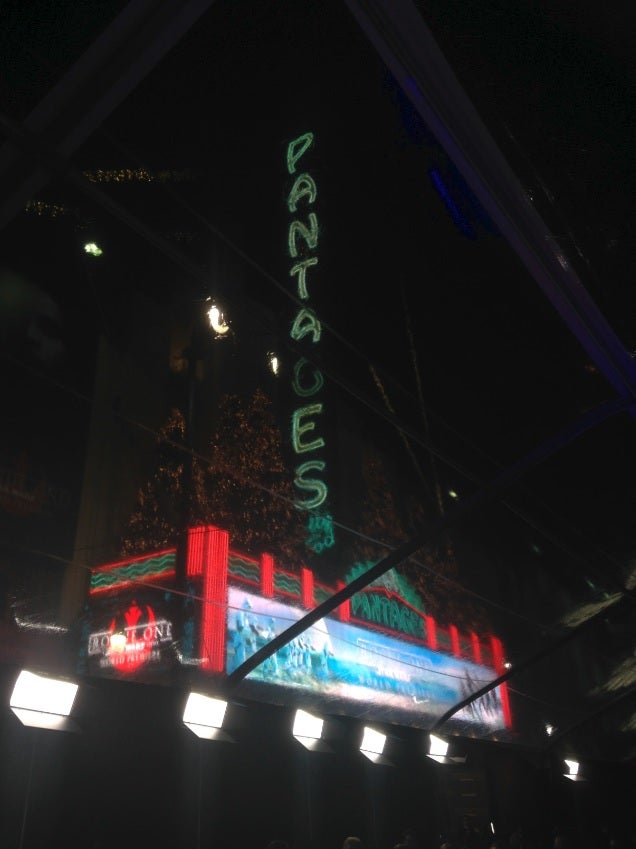 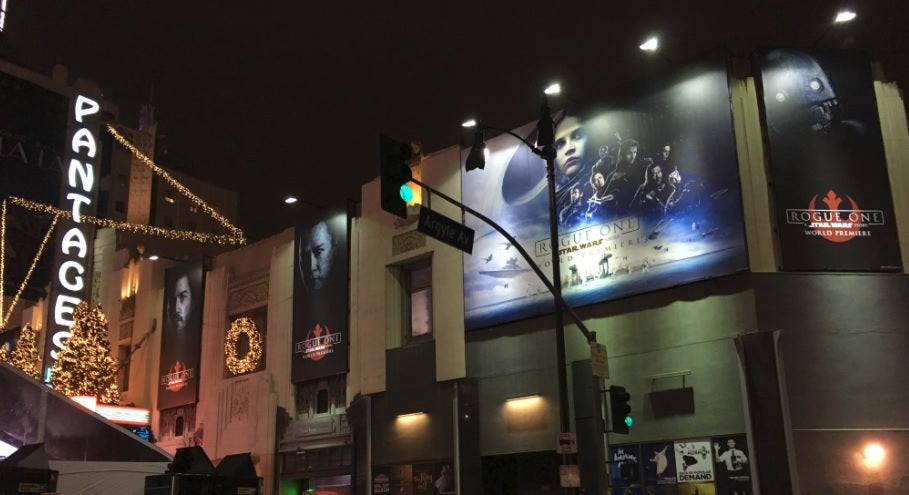 Rogue One banners cover the front of the Hollywood Pantages 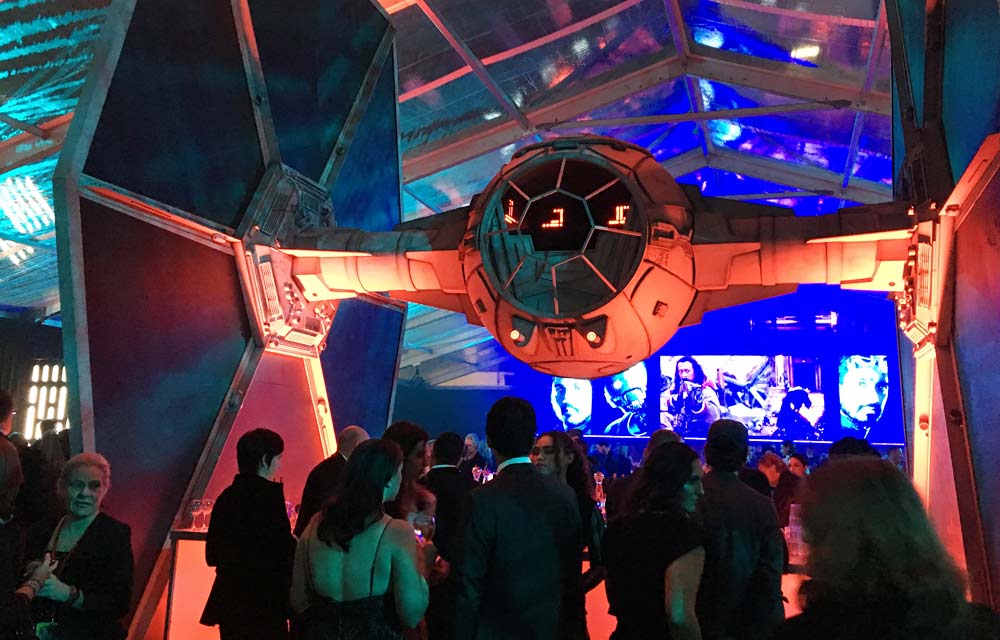