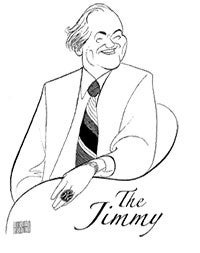 The National High School Musical Theatre Awards™ (NHSMTA) was established in 2009 to elevate the importance of theatre arts education in schools and reward excellence in student performance. The program impacts over 50,000 students annually who participate in high school musical theatre competitions sponsored by thirty professional theatres throughout the US.

Since its inception, NHSMTA has been the catalyst for more than $1,000,000 in educational scholarships awarded to deserving young performers. Also known as The Jimmy® Awards, named for the late Broadway impresario James M. Nederlander, and is administered by The Broadway League Foundation Inc.

NHSMTA week takes place annually in June in New York City. The Jimmy™ Awards are presented on Broadway at a Nederlander theatre.